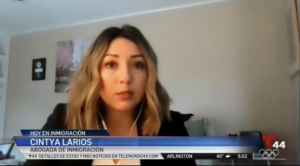 Yesterday evening, our Attorney Cindy Larios, was featured on Telemundo 44 discussing the most recent changes to the civics portion of the naturalization test. Towards the end of last year, we posted about how USCIS revised the civics portion of the naturalization test when it introduced the 2020 version. After much criticism, USCIS announced that it would be reverting back to the 2008 version of the test. During the transition, USCIS will allow applicants with interviews scheduled before April 19, 2021 who applied after December 1, 2020 and before March 1, 2021 to choose which version of the test they would rather take. For any applications submitted on or after March 1, 2021 or any interviews scheduled on or after April 19, 2021, applicants will automatically be given the 2008 version of the exam. There have been no changes to the English portion of the naturalization civics test, and exemptions still exist for those applicants over the age of 65 who were permanent residents for 20 years prior to applying.